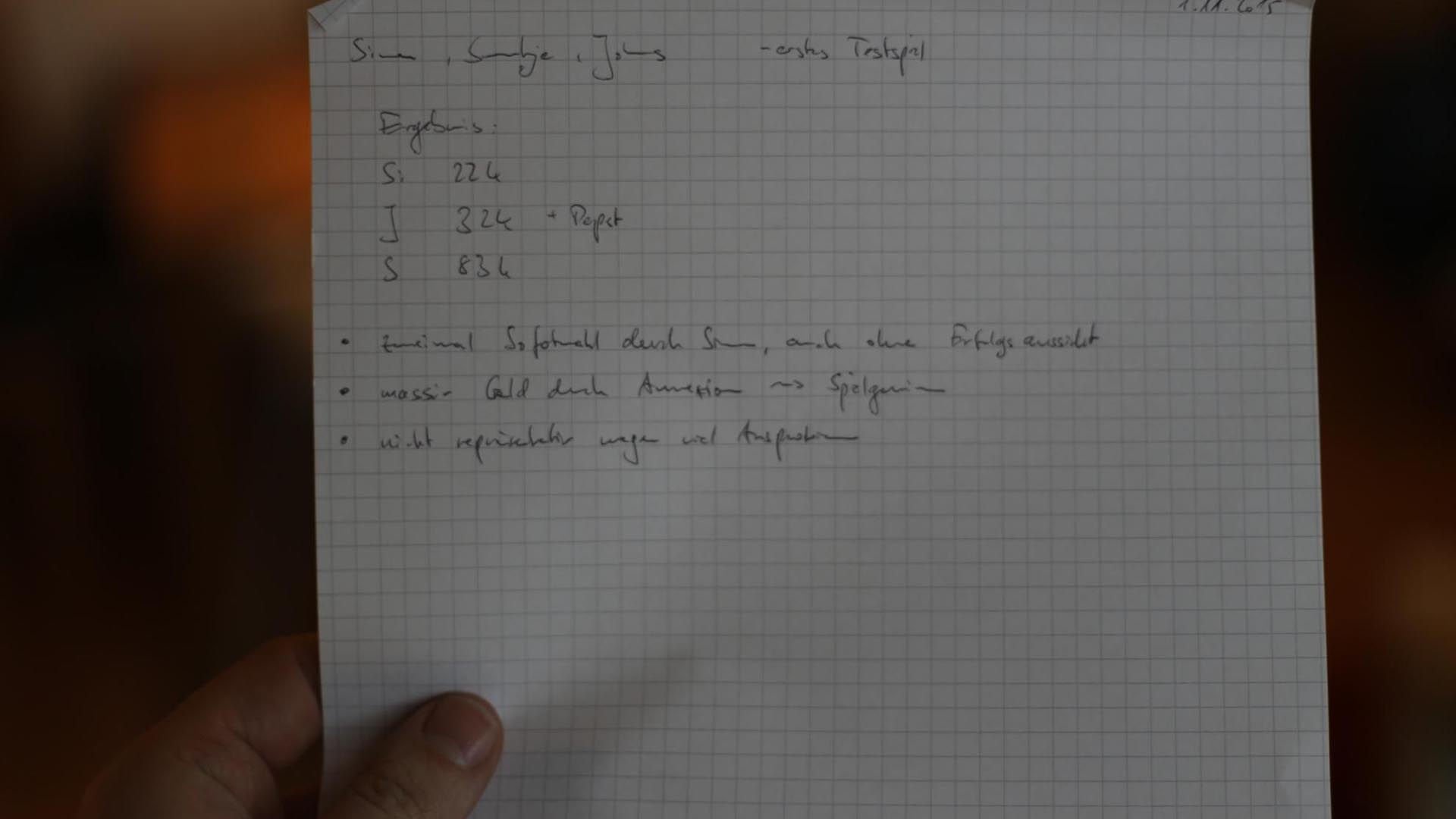 Testing It for The First Time

With our newly-created first prototype in hand, it was time to try out the game for the very first time. So we made a date and prepared to play — not even a week later, on November 1st, 2015, would be the day of days.

On the day we met with Simon and his wife to play the game. We had gathered all of the materials of last week’s crafting session and started setting up the game. Of course, that was when we noticed that we didn’t have all the parts we needed. And not all the rules were exactly defined. And that we had two different variants of the game we could and should test out. Luckily, all of these problems were quickly solvable: we simply agreed on the remaining rules and built the missing parts out of paper. Then we decided on testing my variant first, put everything up on the table and started playing. I was really tense when we started because this was it, our game, for the first time.

And it was… ok, I’d say. Wildly imbalanced, half of the options are useless and the other half were way overpowered. The bluffing didn’t really work well since we didn’t know what the stakes were. The cards were really quite off balance, with a lot of luck in it, mostly you’d just get empty cards. And of course, everyone wanted to try all the options, so we basically just goofed around with all the choices in the game.
But it was also fun. I was so relieved after the game because, even though the game was clearly far away from being a game, it was already headed in the right direction. The core of the game, bluffing to get votes, was working, and it was fun.

We might not have any pictures from the event, but at least we know who won: Simon’s wife. With more than two and a half times the points of the next player (me), and she wasn’t even elected. That also worked immediately: becoming Pope was so capital-intensive that the elected player usually wouldn’t win. We increased the gains from being elected in later versions to make it more balanced in that way.

Naturally, we played a few more sessions that afternoon, all with varying rules and differing amounts of cards. The results were all the same: it was fun, but also massively lopsided, half of our ideas weren’t working, and becoming Pope was so capital-intensive and risky that the players that were elected would usually not win.

There were many more playtests after this and the game changed completely up to today, but, again, we were already on the right track with that first game.

Next week we’ll jump in time a bit: Simon will show off some of the first artwork we got for the game.